Risks and mitigation measures for procurers to tackle currency volatility

Globally, major economies adopt a floating exchange rate system. The rate of exchange of one currency with respect to the other is decided by numerous technical and fundamental parameters. These include relative supply and demand of the two currencies, economic performance, outlook for inflation, interest rate differentials, capital flows, technical support, and resistance levels of the particular countries.

As currency is currently the only means of trading, knowledge about ways to mitigate risks involved with its volatility as well as using estimates to determine the future trends make it rather imperative in this globalized economy.

The whitepaper will mainly focus on the effects of currency fluctuations on procurement in the mining industry and the methods to minimise its effect. It also discusses potential cost saving opportunities in procurement.

Companies mostly regulate only the most noticeable risks, such as exposure from a large transaction in a developing nation which can be hedged with financial instruments, including currency futures, swaps, or options.

However, they do not work for every currency risk—and companies often face far greater exposure from less obvious risks that are much more difficult to manage, including risks that stem from mismatches between costs and investments in one currency and revenues in another.

The following bar graph shows the currency impact on the net annual income of Alcoa as reported in their annual report. 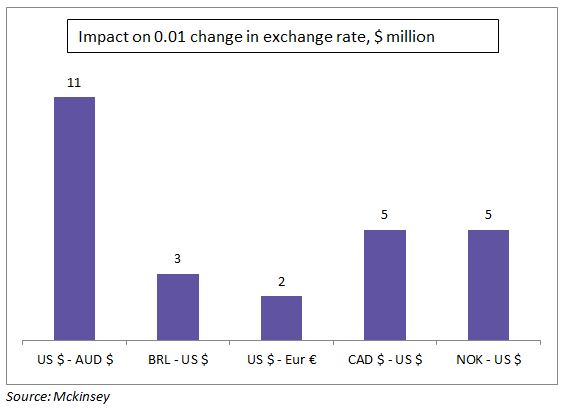 From the graph, it can be inferred that the company might lose an equivalent amount of money in millions of dollars due to just a 0.01 change in the corresponding exchange rate. The number may not look huge but it keeps rising with the increased change in exchange rate and the amount of transactions.

Currency risk cannot be totally eliminated from global supply chain companies with continuous cash flows. However, they can be altered or minimised depending on the type of risk involved.

The diferent types of risks are:

Risks where the inflow and outflow of cash reacts differently to currency fluctuations. For example, if an Australian mining company selling commodities to the US company incurs costs in AUD, it has a higher impact on the net cash flow from US operations. If the cash margin is 15%, then only a 5% drop in the currency will deflate it to 11%.

This type of risk can put a company in financial distress. Natural hedges can be levaraged only when the associated costs are not too high, but can put competitive advantages at risk.

A company with global shareholders can reduce the portfolio risk by hedging the currency in futures positions. An example of portfolio risk is where a 10% change in the exchange rate, appreciation or depreciation, would lead to the equivalent % change in the company’s cash flows from that particular country. Type of risk, mostly not sufficient to put a company into financial distress but it can basically change a positive cash flow into a negative one.

These risks are visible and can be measured and managed with changes in contracts. For example the contractual payments terms (duration) can be altered with mutual consent of both parties involved to suit both of them.This type of risk affects urgent transactions and short term cash flows. But it is not enough to put the financials of a company at risk.

Currency fluctuation with respect to US$

The map shows the fluctuation in currencies of key mining activity-related countries. 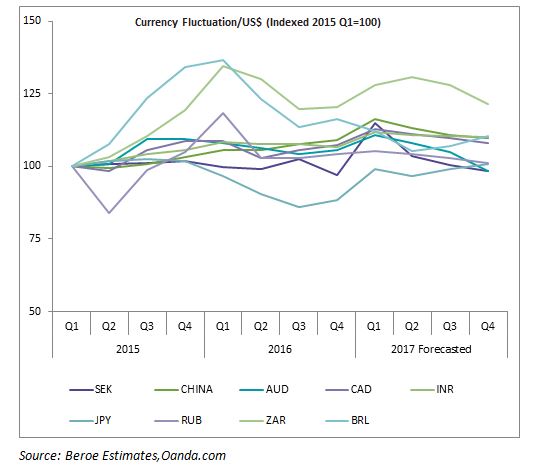 When a currency is devalued heavily against the US Dollar, the focus of the procurement team should divert towards other safer bets.

For example, Swedish Krona is expected to depreciate by 10.1 percent in the second quarter of 2017. Buyers of mining equipment can negotiate the prices and pay lower amounts in US$ for the same amount of money involved.

Below is the graph illustrating a case of procuring mining equipment directly from Sweden at different currency rates. 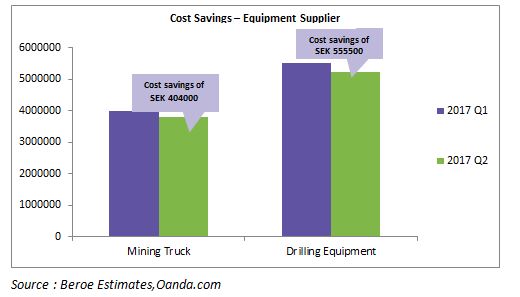 The cost of a mining truck is SEK 4,000,000 and that of the drilling equipment is SEK 5,500,000. Assuming the SEK depreciated by 10.1 percent in the second quarter of 2017, the supplier of manufacturing equipment will have an additional cost savings of SEK 404000 and SEK 555500 for the mine truck and drilling equipment respectively.

For potential cost savings, the buyer (mining company) can negotiate with the seller and pay an equivalent lower price in US$ to the seller (equipment supplier).

Below is the graph which shows the equivalent cost savings to the mining company due to the depreciation of the krona. 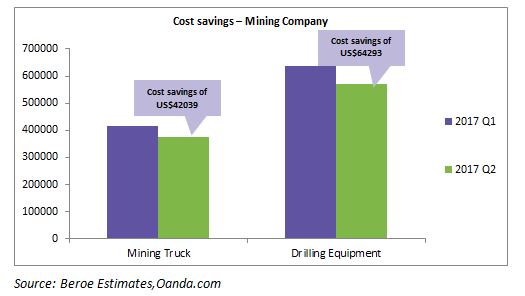 The mining company due to currency depreciation can renegotiate the price with the equipment supplier to the tune of $42039 and $64293 for the mining truck and drilling equipment, respectively, having significant cost saving.

The currencies heat map is a set of tables which display the relative strengths of major currency pairs in comparison with each other. It can be used as a tool by procurement teams to plan their sourcing with respect to the variation in currency fluctuations.

This table shows the percentage change in price of various currencies and metals against each other. The first one shows the heat map of 2015 and 2016 while the next one is the forecasted values for 2017 for major mining countries. 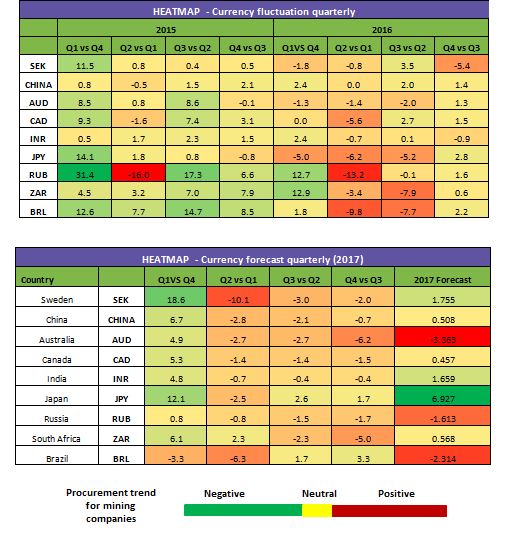 Green swatches show those currencies that have appreciated or risen in value against the US dollar (base currency) over the time period chosen.

Red swatches show those currencies that have depreciated in value against the base currency over the time period chosen.

The best practices for currency volatility include the involvement of tools such as probable measures of uncertainty and flexibility analysis. This approach will not only value a project in an environment of uncertainty, but also provide mining and metals companies with a guide for the possible courses of action to optimize their returns. Unfamiliarity with these tools and the supporting theoretical basis by decisionmakers is the biggest obstacle to their widespread usage. Organizations that do use them have a distinct advantage, as long as they are able to effectively communicate their quantified choices in simple, non-technical language.

How to deal with the currency fluctuation?

To ensure cost savings during currency fluctuations, there are several windows of opportunities which can be exploited to make significant monetary gains. 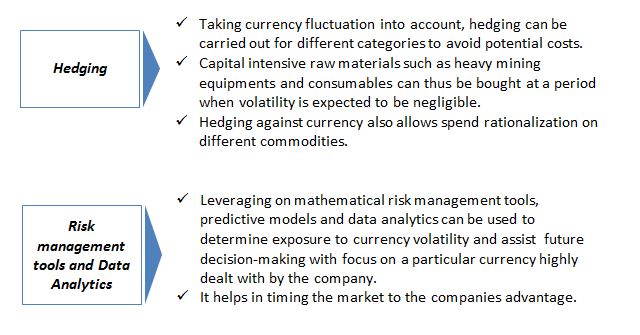 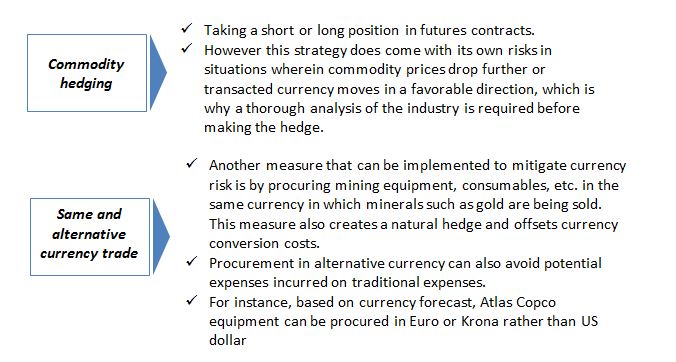 Other qualitative measures such as relationship with supplier to defer payments until the currency fluctuation is low also help in lowering costs.

Sourcing from different geographic locations can also help in reducing currency impact. For instance, equipment of the same OEM can be procured from India or China rather than Sweden if currency fluctuation is low in Asian countries.