Supplier funding for capital investments in catering is a tricky affair

The concept of suppliers funding buyers’ capital investments has been in practice for a while now. This is because of the growing understanding of the benefits of such symbiotic relationships. However, such a practice has been very rare and niche in the catering industry.

This white paper addresses various critical aspects related to supplier funding for a capital investment model such as:

Since this is a highly niche segment in the catering industry, there are primary concerns of quality and control over the engagement. Understanding the finer details of the engagement and the factors that need to be considered before entering into such arrangement is essential to avoid failures.

Category managers of global companies are constantly looking at opportunities to cut down on cost and the need to invest heavily on activities that are not a part of their core business. Supplier funding for capital investments in non-core areas therefore become highly lucrative as they present an opportunity to free working capital without affecting the operations and hurting the line of credit with the bank.

However, entering into such an agreement based on this perception of free money can be disastrous for buyers. Since the suppliers are putting in the necessary capital, buyers have little control over the quality of services provided unless explicitly agreed upon during the contract formulation phase. This exposes the buyers to the risk of poor service quality unless they decide to break the contract and pay back the unamortized amount to the suppliers. However, this defeats the entire purpose of getting into the contract in the first place.

Why do buyers look for suppliers funding for capital investments in catering? 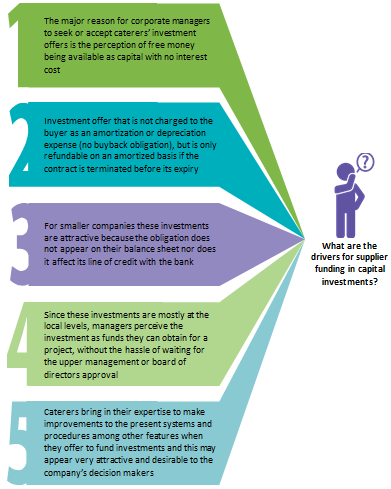 How is the market with respect to supplier funding for capital investments in catering?

As noted above, suppliers prefer investing primarily in educational segments and business segments. The major drivers for the suppliers to invest in these segments are:

While the major driver for the buyers to accept supplier funding is the availability of working capital without affecting the core business functions, greater opportunities presented by colleges and universities to recover the investments faster than any other corporate engagement scenario definitely do make them attractive for the suppliers. But the supplier may or may not invest in the buyer’s project depending on various factors that influence the investment decisions.

What are the various factors influencing the supplier’s investment decision?

Suppliers use investment offers as means to secure business and critical decisions such as to invest or not to invest and the quantum of investment are dependent on the following major factors: 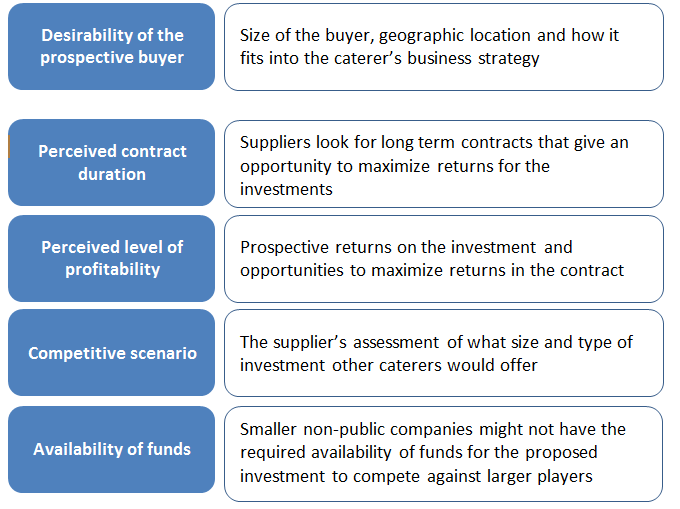 What are the pros and cons of the model that needs to be considered by the buyer before making a decision?

What are the factors that need to be considered by the buyer before the model can be adopted? 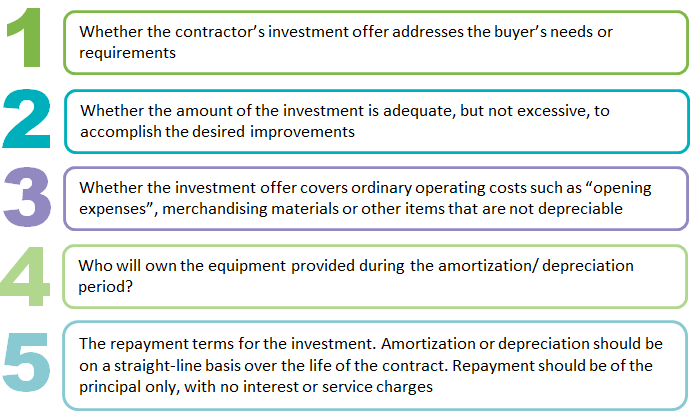 In case of large critical requirements where the buyer feels that substantial investments would be required and is hesitant to put in own capital, supplier investments can be looked into. In such cases, the best option is to identify the purpose for the investment and include an invitation to fund the project in its Request for Proposals (RFP) so that, the competing caterers will make their best offers as they strive to win the contract. Suitable projects for such an engagement include construction of a new food service facility or renovation of an existing facility.

What should be the buyers’ strategy for a best-in-class contract formulation?

To have a best-in-class contract, it is important for buyers to look into the following:

How are the payment terms defined in a supplier-funded model?

In a supplier-funded capital investment model, the payment terms are usually defined as:

Signing bonus: Usually the signing bonus is not charged directly to the buyer, but is amortized over the prospective contract duration. If the contract is terminated for any reason by either of the party, before the end of the contract period, then the buyer must repay the unamortized balance to the supplier.

Charges for facilities improvements: Investment is charged to the food service department as a cost of operation, also amortized or depreciated over the contract duration on the same terms as the signing bonus. If the contract is terminated for any reason by either of the party before the end of the contract period, then the buyer must repay the unamortized balance to the supplier.

Generally, a large corporation with around 2,000 employees at one site can expect:

·         The repayment terms would be the same as described above

·         The amount and whether some portion will be a signing bonus depends on the circumstances of each individual deal, including the competition among caterers trying to win the contract

How is the payback period for the investment calculated?

The investment payback is commonly calculated on a straight-line basis, with equal payments per month for an agreed number of years. The size of the investment in relation to the size of the food service operation dictates the length of the payback period.  The annual payback should not exceed 5 percent of total revenue or, in a subsidized operation 5 percent of total costs. (When a food service operation is subsidized, only the management fee or other direct income is considered revenue to the caterer).

Most medium to large-size educational institutions such as colleges and universities have food service sales of $10 million or more and large investments are common. But very few companies have services of such size and operational volume at a single location. Companies such as Boeing and IBM may have volumes close to $30 million - $50 million in total, but for them too, very few locations would have as much as $10 million in sales at one location.

Scenario 2: For investments not backed by large scale operations

Note: All the above calculations are based on the assumption that the caterer will earn at least a 20 percent ROI (Return on Investments)

A company desiring a $2.5 million or more investment, but whose food service is not of the sizes indicated above, would have to agree to a longer payback period. The caterer will require some concessions and assurances to reduce the risks.

Caterers differ on ownership of the equipment purchased with the investment during the amortization/depreciation period, primarily because of their tax considerations. Primarily in all situations, the buyer is the owner only upon the completion of the amortization/ depreciation period. In case the contract is terminated early and the buyer makes payment to the caterer of the unamortized/undepreciated balance, the buyer is deemed as the owner of the assets which are part of the contract.

The buyer should be flexible about the investment being amortized or depreciated and the caterer or buyer owning the equipment provided during the payback period. In any arrangement, improvements to facilities will always belong to the buyer and title to equipment always passes to the buyer upon repayment of the investment.

What are the opportunities and threats to buyers in this model?

The various opportunities for the buyers are:

There are potential threats in the engagement that needs buyers’ attention as:

What are the risk mitigation strategies that help in minimizing the risk exposure of buyers in this engagement?

To minimize the risks associated with the engagement, the buyers may adopt the following strategies:

The suppliers may try to maximize their benefit from the deal. Therefore, the buyer needs to be well prepared and negotiate hard for more accountability for quality and more control

The make and quality of the equipment to be purchased as well as other depreciating assets should be discussed before hand. The average life time of kitchen equipment is about 15 years and this needs to be considered before making a purchase

While the opportunities might be tempting to go for a supplier-funded investment model, the buyer needs to look into preparedness in terms of handling the contract and mitigating the risks/ threats associated with the engagement. This being a highly niche engagement strategy, the buyer needs to have a clear understanding of why they want to go for it and accordingly formulate strategies that would govern the engagement with the supplier. Since the investments vary significantly depending on the scenarios and negotiation, it is advisable for the buyer to engage an external consultant proficient in the supplier investment processes as a normal catering manager might be under-equipped to handle such scenarios.