Mobility Package and its Implications on Europe Road Freight Cost 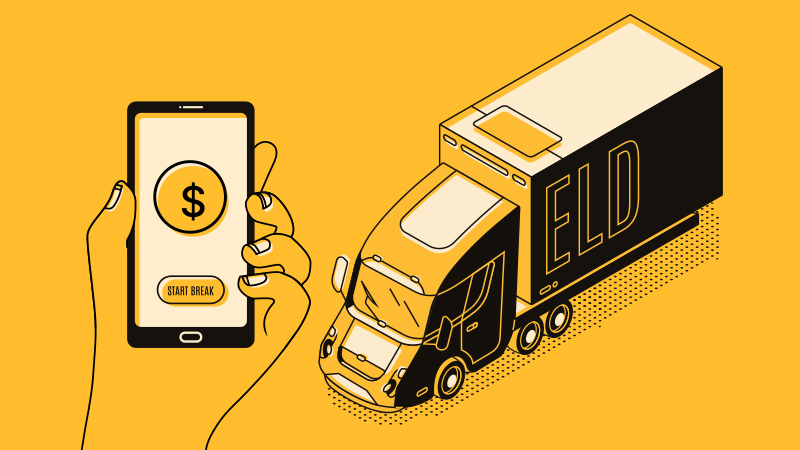 The Mobility Package was introduced by the European Commission in July 2020 across Europe, with an objective to improve driver safety, working conditions, and facilitate healthy competition among road freight service providers. Due to the complexity involved in the adoption of new rules, the implementation is decided to take place in a phased manner. The first set of rules pertaining to driving time and rest time was implemented in August 2020. The major changes in rules, pertaining to cabotage and posting of drivers, are effective from February 21, 2022. As a part of the new rules, road freight operators will adhere to the following regulatory changes:

Carriers of Eastern Europe have always had a price advantage over carriers based out of West or South of Europe, mainly due to relatively low driver wages. For instance, driver wages in Belgium, the Netherlands, and Germany are twice as much as the wages in Poland, Lithuania, or Hungary. This is the main reason that Polish carriers account for more than 35 percent of the cabotage road freight market in the EU. As the new rule demands adjustments in driver wage according to market wages in the destination country, the implementation of these rules will attract additional operational expenses for cabotage road freight operators, in terms of wage increase, empty miles, and idle time. As the European road freight market is already encountering constraints, led by the pandemic and the Ukraine–Russia war, several road freight associations from Eastern Europe pleaded with the European Commission to delay the implementation. This led a few countries, such as Denmark, offering a grace period of up to three months. This means operators failing to adhere to the new rules will not be penalized, supporting the carriers to adopt to these rules. As rules are certain to be active, road freight operators are likely to pass on the additional expenses to their shippers in the form of rate increases and surcharges, based on their current transportation contract structure. The objective of this whitepaper is to analyze the impact of these fresh rules on road freight operators and their operating expenses. Additionally, the recommendation for shippers, in terms of procurement best practices, is also captured.

The reaction will be largely based on the operating structure of the carrier. Road freight operators based out of Western Europe are unlikely to face any major change in costs, as driver wages are already higher compared to the rest of Europe. Björn Schmidt, working as a General Manager in STR Speditions GmbH – a liquid food bulk haulage company, based out of Germany, cited that his company expects no major change in costs due to the mobility package, as the wage cost is already high in Germany. However, he added that the ongoing war situation in Ukraine is likely to intensify the driver shortage in Western markets, as a fair share of drivers working in the region are Ukrainian nationals. However, cabotage transporters based out of Eastern Europe will face increased expenses. In addition to driver wages, the new rule demands trucks to return to their home country within eight weeks from the date of departure, leading to additional empty miles and related toll & fuel expenses. The consequence of increased travel could be up to 4 percent additional kilometers, mostly empty, when compared to the pre-Mobility Package scenario. According to a study conducted by the European Commission, these additional journeys could lead to emission of 3.3 million tons of CO2 into the atmosphere, annually. It is also expected that some carriers could abandon certain routes in Western and Southern Europe, due to stiff price competition. This could mean capacity constraints in the region, due to lesser trucks for cabotage operations. Few carriers are also trying to move their headquarters to Western countries for business continuity reasons. However, this restructuring move is rare, as it involves one-time relocation costs of up to €1.5 Million. In 2021, 46 Poland-based carriers applied for a German– EU joint license, which is double compared to 2020. More than a dozen of such applications were received by authorities in the first two months of 2022.

The table below indicates the scenario of the expected cost increase, due to the implementation of Mobility Package by a Polish carrier. A Polish carrier is considered for this study, as Poland operates over 35 percent of the EU cabotage road freight. It is anticipated that carriers will incur an additional 9.8 percent expense, excluding the fuel expense, mainly due to the additional costs involved in driver costs, in terms of additional driver wage during cross-border duties and accommodation. There is a huge disparity between driver wages in the Western and Eastern parts of Europe. The implementation of new rules will narrow the gap in wage costs, which could impact the overall price competitiveness of Eastern European carriers. There is also an additional cost involved, due to empty miles, as the truck has to return to the home country within eight weeks of its departure. In total, Eastern Europe-based carriers will face increased costs of up to €16,000, associated with driver compensation, empty miles, and idle time. 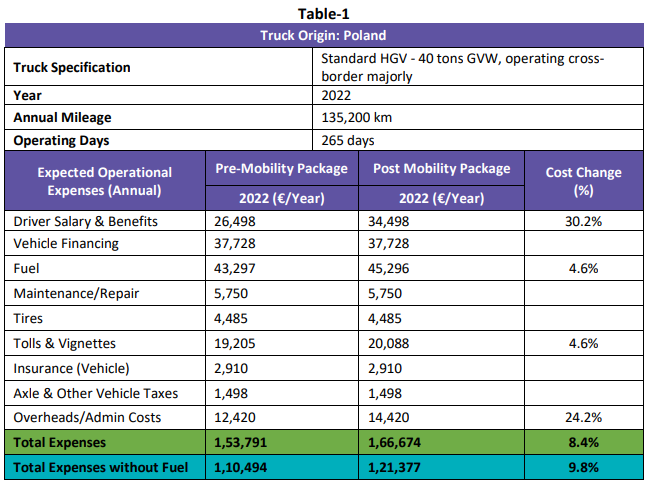 Note: Fuel/Diesel price assumed is €1.15/liter. The benchmark percentage change does not include factors, such as additional labor costs, as a result of a shortage in the labor market (Costs pertaining to hiring temporary workers, recruitment & training of new employees, etc.). Additional expenses, due to the equipment shortage and constraints due to the pandemic and the Ukraine–Russia war.

On an average, based on the region of operation, the impact on each Eastern European carrier on the total road freight cost can be up to 12 percent when compared to pre-Mobility Package levels. The level of cost increase will largely depend upon the current operating structure of a carrier. On a high level, carriers with the most number of Eastern European drivers, performing cabotage for over 20 percent of their total business, are likely to be the most impacted. The table below indicates the average additional cost incurred, due to the implementation of the Mobility Package regulation, based on the road freight operators’ origin and operating region.

On an average, based on the region of operation, the impact on each Eastern European carrier on the total road freight cost can be up to 12 percent when compared to pre-Mobility Package levels. The level of cost increase will largely depend upon the current operating structure of a carrier. On a high level, carriers with the most number of Eastern European drivers, performing cabotage for over 20 percent of their total business, are likely to be the most impacted. The table below indicates the average additional cost incurred, due to the implementation of the Mobility Package regulation, based on the road freight operators’ origin and operating region.

Shippers can expect their Eastern European road freight service providers to revise prices during the renewal of the transportation contract, in order to pass on the additional expenses incurred due to the implementation of Mobility Package, effective from February 2022. In the existing contracts, service providers are expected to demand rate increases in the form of surcharges. Ideally, an Eastern European carrier, operating in Western Europe, will experience an average cost increase of 5–8 percent, due to the implementation of new rules. Similarly, while operating in Southern Europe, the cost increase will be 10–12 percent in the same period. It is possible that carriers could charge exorbitant rate increases (beyond the suggested benchmark) or stop operating on certain routes that are no longer profitable. In such cases, shippers are recommended to consider regional haulers to fulfill their transportation needs. The whitepaper also captures the benchmark average additional cost that can be expected based on the share of cross-border spending with Eastern European carriers. For shippers managing 20 percent of their cross-border road freight spend with Eastern European carriers, the expected average cost increase due to the implementation of the Mobility Package (Post Feb 2022) is 2.1 percent, compared to January 2022 levels. During the same period, shippers managing 80 percent of their spending with such carriers will incur a 5.4 percent cost increase. The assumed region of operation is Western Europe, due to access to international ocean ports and manufacturing hubs. Shippers can refer to table-2 and table-3 to benchmark their expected rate increase, based on their current road freight spend and operating structure. Shippers must also note that the rate increase benchmarks do not include the fuel component. The benchmark, average additional cost change does not include factors, such as labor, as a result of a shortage in the labor market (costs pertaining to hiring temporary workers, recruitment & training of new employees, etc.). Additional expenses, due to equipment shortage, constraints due to the pandemic, and the ongoing Ukraine– Russia war.

The Mobility Package is adopted by the European Union, with an objective to improve drivers’ working conditions, safety, and also promote healthy competition within road freight operators in Europe. However, road freight operators suggest that the implementation of the new rules comes in a situation of crisis, where their operations are battered by the pandemic and the Ukraine–Russia war. The new rule is certain to be an additional burden to operational expenses, as carriers were already suffering from additional costs, due to rising fuel prices, labor costs, and equipment shortages. The European Commission had predicted that the implementation of the new rules will incur an additional cost of up to 10 percent for road freight operators, excluding the fuel component. As a result, shippers are recommended to accept this one-time rate increase after evaluating their current operating model. It is also recommended to have the fuel component tracked separately in the contract, and revise it on a weekly basis, instead of monthly revision, due to high volatility amidst the war situation. Meanwhile, many countries, including Denmark, are offering a grace period of up to three months until July 2022, meaning they will not penalize the violators until May 2022, to support road freight operators accustom to the new rules. The Mobility Package also demands carriers to implement SMART tachographs from August 21, 2022 onwards. However, the best-in-class carriers are already equipped with GPS-enabled smart tachographs.

Please, It is possible to get a copy of this whitepaper?