Though there is a huge demand for natural low calorie sweeteners globally, the production of monk fruit and mogroside extract is restricted by the Chinese government leading to a supply demand gap of at least 600 MT per annum.

The constant quest for natural and low calorie food ingredients by health conscious consumers paved the way for introduction of many natural low calorie sweeteners including stevia.

Monk fruit, indigenous to South China, evolved as a key ingredient in many low calorie processed foods and beverages after its inclusion in the USFDA GRAS list. Given its extreme sweetness, zero calories and other beneficial properties over stevia, monk fruit has won favor with many soft drinks producers.

Finding favour in the beverages industry

Over the past few years, research and development of monk fruit is in the limelight resulting in launch of new products thereby increasing its reception in the beverage sector.  Though P&G was the first company outside China to show interest in monk fruit 20 years ago, the FDA approval brought by Bio Viottoria and Gulin GFS Monk fruit Corp kickstarted the usage commercially. Early adopters are Kashi Cereals and Blue Sky Beverage in the end use industry. However, Tate & Lyle was the first to see its potential among the food ingredient companies in 2010.

Markets moved from introduction to growth phase in 2012, after the release of table product by Splenda containing monk fruit extract. With massive marketing, the number of new product launches doubled almost every year since 2012.

Consumption of natural sweeteners is expected to increase in the coming years resulting in a higher share in the total sweetener consumption pie to 5-6 percent from the current share of 2 percent. Demand for stevia is likely to shoot up to 3000-4000 MT by 2017 from <1000 MT in 2014. Similarly, monk fruit also has huge potential in the food industry as a low calorie natural sweetener and the demand is estimated to increase by 20 percent per annum vs. slow growth of artificial high intensity sweeteners. 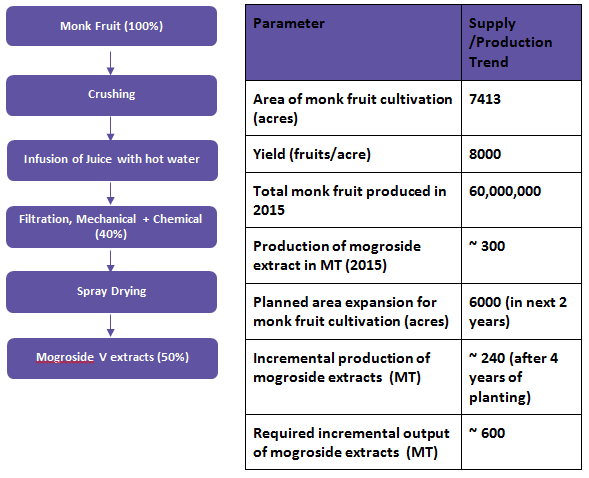 Though there is a huge demand for natural low calorie sweeteners globally, the production of monk fruit and mogroside extract is restricted by the Chinese government. As per the law passed in 2004, removal of luo han guo seeds or their genetic material from China is banned. As a result, cultivation was restricted to other tropical regions suitable for its growth. Until now, luo han guo has been grown almost exclusively in Guangxi in South West China, as the fruit requires a rare combination of warmth and shelter from the sun to flourish. To date, over 90 per cent of China’s output of luo han guo comes from Guangxi.

Guilin GFS Monk Fruit Corp., one of China’s leading mogroside producers, requires over 200 million luo han guo per year to keep its 100-tonne production line running at full capacity - around 40 percent of China’s total output. However, it is possible that action will soon be taken to alleviate the supply bottleneck. According to Herbridge Media, over 13,333 ha of land in Hunan Province was recently identified as suitable for luo han guo cultivation.

The demand for natural sweeteners is driven by increasing shift towards usage of low caloric, non-hazardous food and ingredients. Since there is no single sweetener which serves as an ideal replacement of sugar/sucrose, manufacturers started using sweetener combinations. Usage of multiple sweetener blends has become common in recent product launches. The usage of monk fruit and stevia blends can help reduce the off-taste of stevia. The blend increases the quality of the sweetness, enhances sweet/sour balance and delivers a most robust flavour which form critical sensory characteristics for a successful product launch. 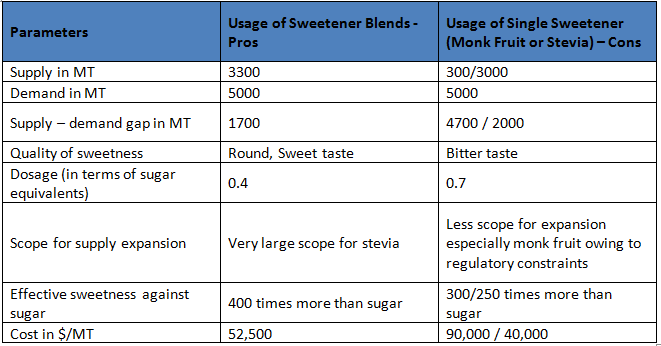 How commercially and technically can sweetener blends compete with individual sweeteners?