Ocean freight container market has undergone transition consolidating the entire global liner market, with all the top liners forming alliances and a handful of mergers and acquisitions taking place in the market. These included Cosco Container Line merging with China Shipping Container Lines, Hapag Lloyd with CSAV, Hapag Lloyd with UASCA, and CMA CGM with APL. Hanjin shipping bankruptcy proceedings have reduced top liners in the market to just fourteen  and is estimated that after the second set of consolidation in next 5 years, the number will further reduce to just six liners by 2025.

This whitepaper discusses the impact of supplier consolidation in the near future, supplier reliability trends, liners volume concentration and negotiation opportunities  for shippers  to explore.

With the recent trend of reshuffling happening with liner alliances, all the major shippers moving their cargo in any  top liner that is part of an alliance will have to analyze the difficulties they may face in tracking the shipments. The carriers switching  alliances is resulting in increasing size and complexity. After all the realignment of alliances  in recent times, ocean freight services  can get commoditized limiting the  opportunities for the carriers to differentiate their services.

Another trend is the usage of mega vessels in major routes such as Trans Pacific and Trans Atlantic, where carriers with limited options participate in an alliance to fill their vessels . After the arrival of mega vessels, liners are incurring more costs due to additional labour cost in handling containers of different carriers in the alliance and the cost for ordering and handling these vessels with freight rates dropping drastically because of over capacity in the market.

Historical liner reliability trend needs to be analyzed to determine whether the large alliances have helped the shippers. It is observed that liners have port calls at different terminals  that delay container unloading and discharge of containers of numerous liner companies at a single terminal is causing port congestion.

It is observed that major shippers with decent volumes operating in all the major routes will benefit from future alliances. Majority of the volumes  in top routes such as Trans Pacific and Trans Atlantic will be handled by the three alliances  in the near future.  This will help shippers to have better negotiation opportunities with limited suppliers to engage in the market and also provide better control over their supply chain  in the long run.

With ever-decreasing profit for most of the carriers and with more capacity available in the market, industry is taking drastic measures to reverse the trend. Four carriers (CMA CGM, Cosco China Shipping, Evergreen Line and Orient Overseas Container Line) from three different alliances have already announced an OCEAN alliance which became operational from April 2017.

Alliances thus far have failed to solve the problem of dipping freight rates. This new initiative is expected to change the situation for the service providers.

At present, carriers without some firm alliance will have to find partners to operate in the market in near future; otherwise the risk of becoming uncompetitive in the market is very high. 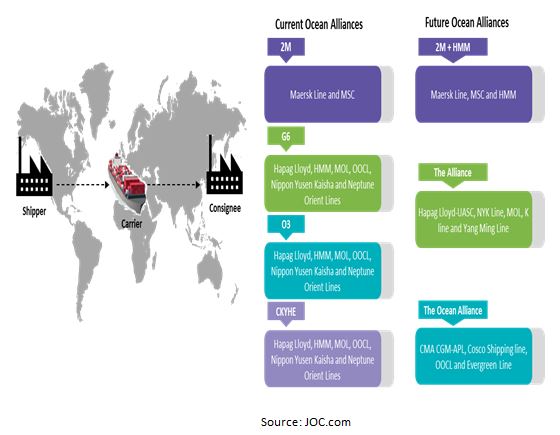 Introduction of mega vessels and change in liners’ strategy

Major liners were expecting high profits after the introduction of mega vessels by exploring economies of scales which never materialized. All the liners made similar investments which drove down the baseline freight rate reducing the profit margin for all the liners.

Large shipping companies benefited from economies of scale in purchasing of vessels, maintenance and other aspect of operations. By implementing this strategy, liners were able to  spread the expenses across large volumes  which gave them superior pricing position. At the same time, smaller players in the market found it difficult  to compete with larger ones due to limited scale of operation and lesser margins.

In 2015, global demand for ocean freight dropped with more supply of vessels in the market by all the major carriers. This  impacted the general market rate prompting the liners to take  some drastic steps to stabilize the market. 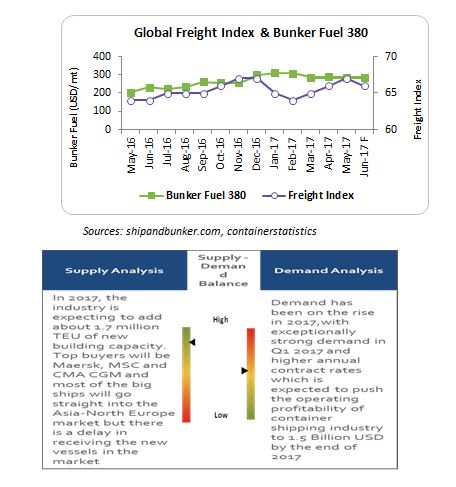 Supply-Demand gap was about 7-8 percent in 2015 due to oversupply of vessels globally with limited demand from all the major markets. This gap is expected to reduce in next 2 years by about 3-4 percent with improving demand from industries such as retail, FMCG, F&B and pharmaceuticals and also because of major liners limiting the new order book and scrapping older vessels from the market.

The volatility of ocean freight rate will depend on factors such as the stability of bunker price, and the alliance restructuring of major liners.

Post the new alliance, shippers will have to check regularly which liners they are partnering with to avoid the risk of sending all their cargo in one ship. However, the complexity of the supply chain is expected to reduce for shippers and carriers. They may benefit from more optimal network and other cost saving opportunities.

Liner reliability after the alliance and future trends 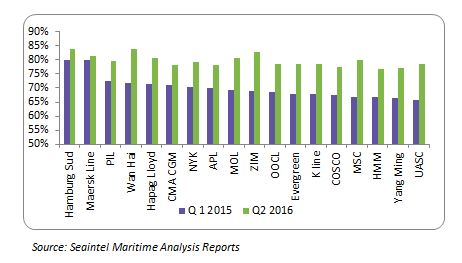 From the above table, it can be observed that the liner reliability has improved drastically within a year’s time with few carriers performing exceptionally well in the market. 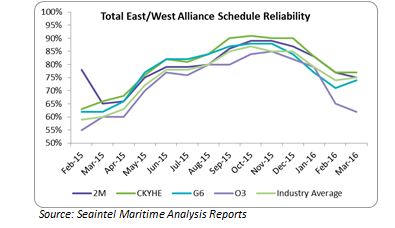 After the launch of the alliances in January 2015, reliability of all the four alliances was evaluated along with the major trade lanes to understand the benefits for shippers. 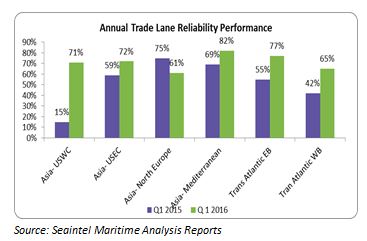 In Asia-USWC performance has improved drastically in last few months upgrading the performance from just 15 percent to 70 percent in few months by managing all the difficulties faced during the service delivery. K Line, MOL, COSCO and Yang Ming performed best at 81.1 percent, 79.8 percent, 79.6 percent and 79.3 percent, respectively, and with the highest performance improvement.

As per the current trends in the ocean freight market, shippers using container  services will benefit in multiple ways.

Service providers reliability has improved after the formation of the alliance and will get better with the new set of alliances. This will help all the major shippers to run their supply chain efficiently.

Complexity of the supplier engagement will reduce for global shippers with movements in all the major trade lanes, since there will only be a limited number of top liners in the market.  After April 2017, only three alliances  are in operation.

Shippers will have better negotiation opportunities while procuring ocean freight services. These services offer Minimum Quantity Commitment (MQC) to all the three alliances that will operate on all the major trade lanes.