Pharmaceutical firms face a pressing need for lean and versatile facilities that can swap between multiple products in multiple formats. Modular facilities is one of the solutions for this need. Modularization in the design of facilities can deliver considerable and quantitative value in the long term.

Pharmaceutical industry has faced few disruptive processes that have altered the cleanroom landscape. Manufacturers are now forced to build their plants considering factors such as scalability, relocatability, affordability and adherence to new regulations. The focus again falls on modular solutions that are the way forward for the industry.

This whitepaper will capture the major changes in clean room standards as well as the shifting trends and key technologies involved in the design and construction of pharmaceutical industry-specific clean rooms.

The market demand for clean rooms has been witnessing a steady spike in the last decade and its growth in the pharmaceutical industry has been stable and quite predictable in the last three decades.

Pharmaceutical manufacturers produce drugs on a massive scale and sell their products through a supply chain. They either:

The regulations that governed the above methods were quite transparent to the constituents of each method. FDA ensured that these manufacturers adhered to stringent cGMP while producing and distributing mass market medicines. Pharmacies were also required to follow state regulations and on certain occasions when prescriptions become sterile compounds, they were implicitly expected to adhere to USP Chapter 797.

In the last few years, there have been some major changes in industry trends such as:

Post 2010, the occurrence of three major events in the pharmaceutical idustry has led to a radical change in the landscape of cleanroom design in the U.S.

In order to meet the above three changes, new solutions in pharmaceutical manufacturing as well as design of cleam rooms was mandated.

Project owners and buyers looking to build a new clean room need to consider the following factors that are key to its sustenance:

This is the traditional method of building clean rooms where some portion of the floor space of a large building such as a hospital or a laboratory is converted into a clean room. Virtually all state pharmaceutical regulations require a clean room facility to be spaced within the ‘licensed pharmacy area’.

These old school clean rooms have evolved from Laminar Air flow Workstations (LAFW) and Biological Safety Cabinets (BSC) to the extent of prohibiting particle shedding materials such as cardboard and paper from being bought into the sterile compounding areas. Ultimately, walls were built around the primary engineering controls and started to filter the air that entered into these walls, which happened as an unplanned activity.

To understand how stick-built clean rooms fare with respect to the primary considerations for clean room construction post 2014, the following table gives a good picture on the consideration of this approach. 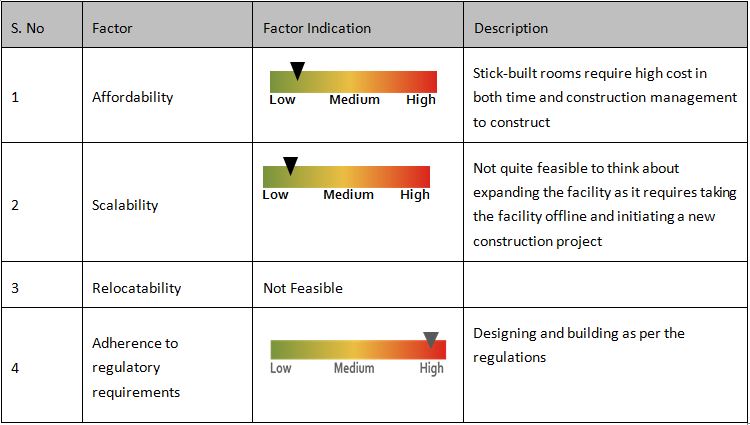 These rooms are generally constructed with the help of a latticework of aluminium frame along with the following:

To understand how pre-fabricated clean rooms fare with respect to the primary considerations for clean room construction post 2014, the below table gives a good picture on the consideration of this approach. 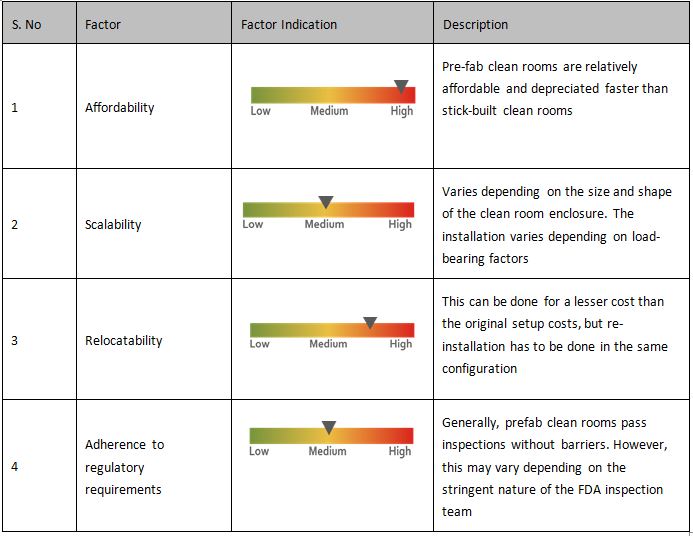 Biologics Modular manufactures aluminium framed rooms by the name of ‘Truly Modular.’ These clean rooms, built inside intermodal shipping containers, can be transported across places and do not necessarily need a controlled environment. These rooms can be purchased or leased and can be placed in diverse locations such as gold mines and hospital parking lots.

Local diseases require localized solutions and getting production online quickly is a major concern during emergency situations.Therapeutic treatments produced through a modular vaccine suite (pandemic ready) is a suitable option in the future when countering tropical diseases and regional outbreaks.

A pod is a prefabricated clean room box designed and constructed off-site. The pod contains air handling units, fire suppression systems and controls. The cleanroom space is accessible through air locks within this pod and the entire pod structure is integrated into a shell. Experts claim that companies could produce antivirals and containment systems via pods in about 12-18 weeks.

PCMM systems was launched in partnership with Pfizer, GEA Pharma and G-Con. These are factories within a pod and can be used to make oral solid-dosage drugs.

KUBio is a turnkey cGMP compliant process and facility solution developed by GE Lifesciences. Since it can be operationalized in 18 months, it significantly reduces time-to-market. This technology has been extensively used in China.

Challenges in the application of modules and pods

Integration of multiple clean room modules requires high levels of skill and expertise. Also, onsite construction and compliance teams are required to continually engage in testing throughout the duration of each module.

Pods need to have a shell building surrounding them and the shell has to be kept at stable humidity and temperature levels. The pod modules can also be called as plug and play modules.

Protocols and ISO classifications can be major obstacles and can affect the quality of modules. The manufacturer also has to tackle location-specific challenges related to local code requirements as well as be familiar with rules related to expansions or upgrades.

ISO Technical Committee 209 has published the standards post revision with regard to comments in the last 5 years, in order to improve the standard specifically to:

2.         Review the classification procedure and make it favorable for rooms in operation

3.        Avoid any significant change to the principles of the current ISO cleanliness classes 1-9.

The below table indicates the changes made to specification limits for some of the ISO cleanroom clasifications: 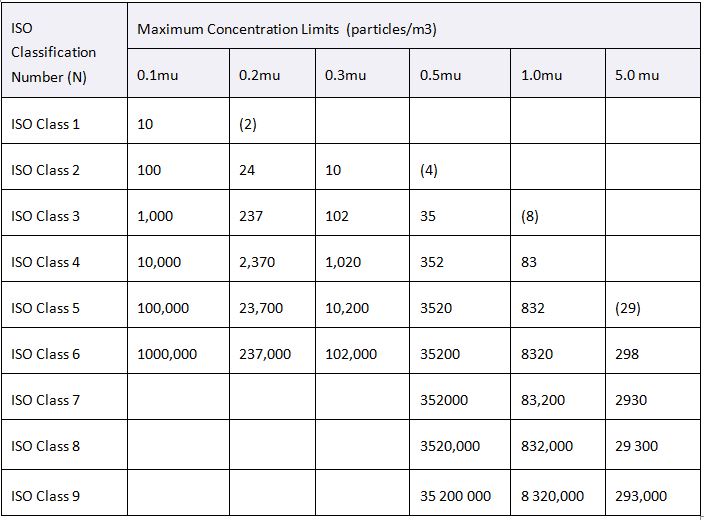 The ISO committee has made changes in order to improve the standard to :

1.        simplify and clarify requirements and guidance tables that denote frequency of testing and monitoring of clean rooms used to demonstrate continued compliance with the cleanliness classification

2.        review how the intervals may be extended, provided that automated monitoring systems show that clean room is under control

3.        give new guidance on aspects that should be considered when configuring a monitoring system for a clean room

To adhere to the recent objectives of the ISO community, changes to the ISO 14644-1 related to the classification method are captured in the below table:

a)       A new table has been drafted for indicating the number of sample locations, replacing “N-L = √A” from the 1999 version of the standard. For all room sizes more than 6 m2 , the new table provides a considerable rise in the required sample locations 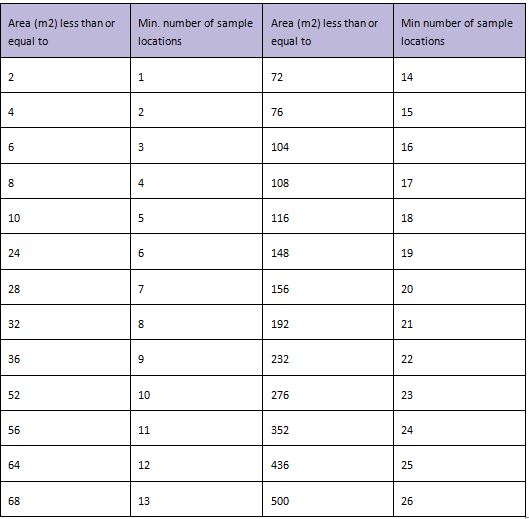 a)       Similar to the 1999 standard, the draft standard needs room to be split into relevant number of sub-divisions. However, the new standard mentions that measurements are required to be taken at a random range from within each sub-division, and this location needs to be  randomized again at each classification. The 1999 standard permitted the sample locations to remain the same at each classification.

b)       The standard also allows for locations which are high risk in nature, to be sampled in addition to the randomized sample locations.

The revision to ISO 14644-2 has included few new requirements which conform to the current industry practice and the key changes are as metioned below:

a)       The draft standard clearly mentions that routine strategic testing and real-time monitoring have differences, which was absent in the 2000 version.

b)       Formal classification testing needs to be performed annually, as a minimum - except where  air cleanliness monitoring on a real-time basis and room pressure differential indicate ongoing control AND which allows industry regulation to be over longer periods.