Consolidation of advertising spend has been a predominant lever used by marketers to reduce overall engagement costs with advertising agencies by promising higher volumes. This has indirectly lead to holding companies acquiring smaller agencies with specialised services in various categories such as production, digital, POSM, sponsorship, and PR to ensure that they are able to consolidate services for buyers across markets.

Network agencies, while being a part of holding groups, are emerging as market leaders and winning all the major buyer accounts across various industries. Independent production houses, due to strong headwinds are being forced to maintain coordial relationship with these market leaders to ensure that smaller business volumes are redirected inwards. It has been observed that on several occassions, network agencies have interfered in quotations being presented by independent production houses during the bidding process with prospective buyers.

Investigation by Department of Justice on production bid rigging

Rebacca Meiklejohn, an antitrust attorney appointed by the US Government is investigating an on-going issue involving leading network agencies that are oppressing independent production houses to submit overpriced bids in order to eliminate competition in final bidding stages of high value contracts with top marketers in the industry.

Key findings of the case

Justice Department has also suspected a layer of controversy in the industry wherein an estimate of $529 billion is fabricated between major parties, based on reports submitted by K2 intelligence.

What can marketers do?

Reduce involvement of agency of record in budget process

Evaluate the agency bid in detail

What can independent agencies do? 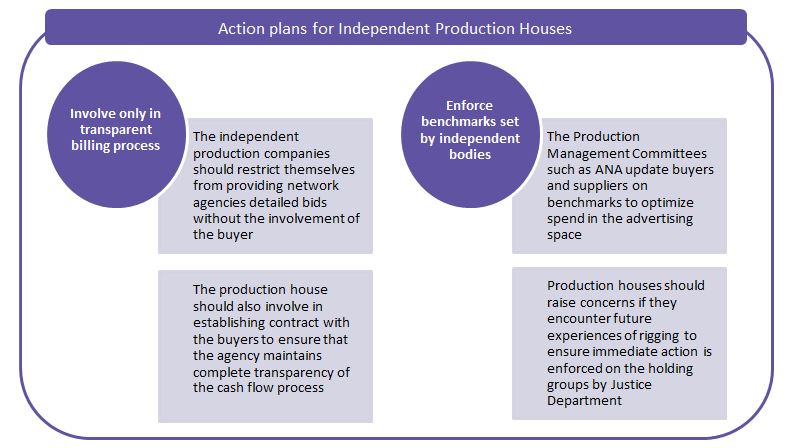