Automation practices and its benefits in BPO

The BPO model for transactional activities has achieved the highest level of efficiencies in terms of standardisation and centralization in recent years, driven by rigorous process and technological advancements incrementally added along its evolution timeline.

Automation practices in BPO are considered as the next big thing in the area of process improvements in the industry. Robots, softwares, and automated processes will drive the transformation of BPO in the future.

A BPO ecosystem with systematic involvement of automation practices and the right implementation roadmap can help organizations achieve significant process and cost savings. Automation and offshore model can further the achievements to a greater extent.

BPO evolution has always been driven by the constant demand to achieve cost and process efficiencies. The transactional activities in procurement and finance have been in the scope of process standardization and centralization since the beginning. The repetitive and less judgement-intensive nature of these activities made them ideal for outsourcing.

The current state of BPO industry is highly mature and standardised providing significant cost savings. Having reached a saturation point, the industry has no more room for furthering the efficiencies.

The elements in BPO that once beckoned organizations for its adoption are:

The solution - automation practices – the future of BPO

The market has turned its focus towards the advancements that process automation industry has made in using robotics, macros, rule-based algorithms, etc.

Applicability of automation across categories

Given the current stage of maturity, automation can be adopted for  transactional, repetitive, and less judgement-intensive processes.

How to adopt automation practices?

The digital/robotic automation, commonly termed Robotic Process Automation (RPA), is the most adopted and relatively mature technology. The objective of RPA is unequivocal – to iterate the business processes in a way that it replaces human resources.

The process selection for automation should be based on systematic criteria and a structured roadmap. 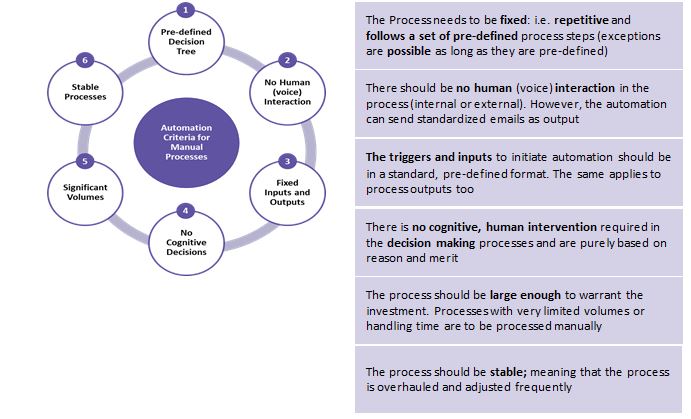 The types of automation, its scope and maturity

Considering the existing legacy systems and operations widely used in BPO environments that the innovative automation technologies must interact with, here are some observations:

1.      Based on process level: Based on the scope of automation in terms of the processes it can be associated with, we can segment them into 3 types

2.      Based on level of Intelligence: The automation tools/practices differ based on the level of intelligence the processes demand

3.      Based on the origin: Automation technologies can be segmented into five categories. Macro or scripted, IT, and business process automation are the most adopted technologies 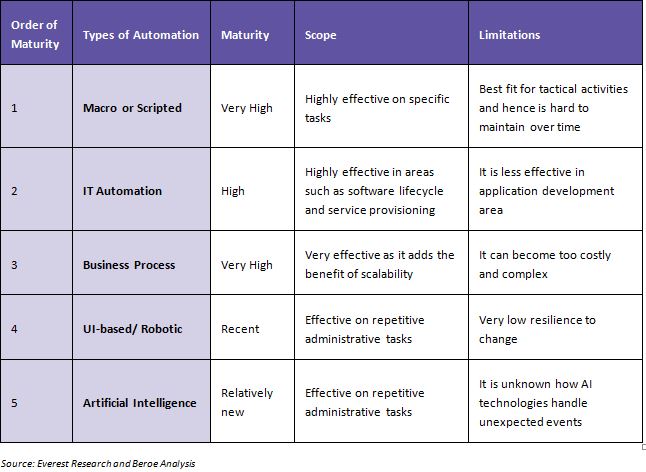 Journals were processed either manually (keyed in ERP) or by uploading using Excel templates. The manual journals contributed to about 16 percent and auto-uploads contributed to 84 percent of the overall volume. Since they were adhering to the acceptable SLAs during the period, the biggest challenge was that 85 percent of the monthly volumes were received during month end with the process prone to typo and oversight errors.

The buyer along with the third party outsourcing servicing provider initiated efforts to streamline the scope. The identification of automation opportunities where conducted via the third party’s proprietary Business Process Management System and the DMAIC approach. The robotic process automation (RPA) enabled auto-selection of the template, auto-data entry into document, auto-emails and auto-data entry into ERP capabilities

·         Robot automatically routes the exceptions instead of manual handling

RPA is the most mature and widely adopted automation technique in the market currently. A best-in-class RPA process can replace 1.5 FTE manual resource per Robot installed in place.

For instance, assuming a spend for procurement operations of $1 million for onshore operations, the automation initiative can target to attain 40 percent reduction in FTE count. 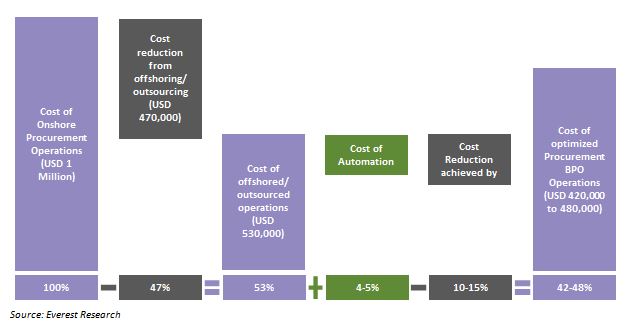 If the operations are offshored/outsourced, the combined model which is most lucrative for attaining maximum process and cost efficiencies can achieve around 40-45% cost savings, altogether.

•      The business process service delivery automation value proposition goes beyond cost reduction; gains in terms of scale, speed, and quality can be attained

•      Hence, the best choice is to automate high-volume transactions

Impact of Afghanistan Political Crisis on Trade and Aviation