In this white paper, we discuss the current position and key challenges faced by Indian IT outsourcing companies and highlight the steps taken by Indian IT firms to overcome the challenge. We also focus on the key emerging and alternative outsourcing/nearshoring destinations for western clients.

For over a decade, India was known as a key outsourcing destination for western clients and it continues to sustain its position. The key factors driving the Indian IT industry are availability of skill sets, language proficiency and low cost.

According to “Tholons Top 100 Outsourcing Destinations 2016” report, 6 Indian cities were citied among the top 10 key outsourcing cities. The other 4 cities are Manila, Cebu City, Kraków and Dublin. 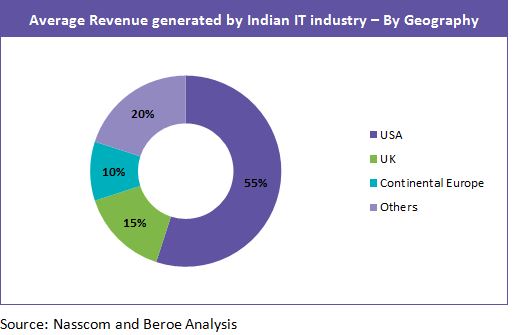 However, in recent years, increase in attrition rate among Indian IT firms and enhanced quality of service from Asian and Eastern European countries such as Indonesia, Philippines, Poland and Ukraine has shifted the clients mindset from perceiving India as their only outsourcing destination.

The key problem with Indian IT industry is “Attrition Rate”. The below indicators highlight the average attrition rate attained by Indian IT firms during 2014-15.

Salary is considered to be a major ground for attrition rate and employees usually receive 5-6% hike with current employer. However, if they switch their job, the salary hike could go up to 15-20%. Attrition influences the training, recruitment and additional compensation expense. Hence, it has a significant impact on the billing rates. 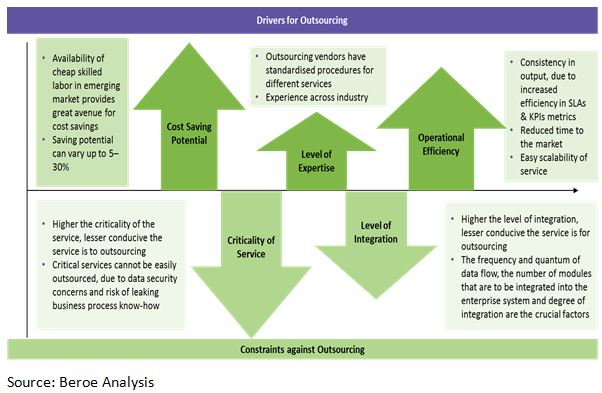 In past 5 years, Indian BPO industry lost 10% of global market share to China and Philippines. Malaysia and Philippines are competing with India in terms of low cost workforce.

Shift from Outsourcing to Insourcing and Near-shoring:

Low cost is not the only factor that drives the outsourcing business. The trend has started to shift towards skilled labor and quality workforce.

In recent years, there are instances where enterprises started to adopt “Insourcing” (i.e. by managing their IT requirements internally), rather than outsourcing or near shoring. The key factors driving the Insourcing trend are “Build rather than buying”, demand for higher control over output and quality and maturity of internal IT team.

Leading enterprises such as AIG, AstraZeneca and Deutsche Bank have started to insource software development projects instead of outsourcing to Indian IT firms. However, enterprises such as Citigroup, General Electric and Bank of America are continuing to invest in India. 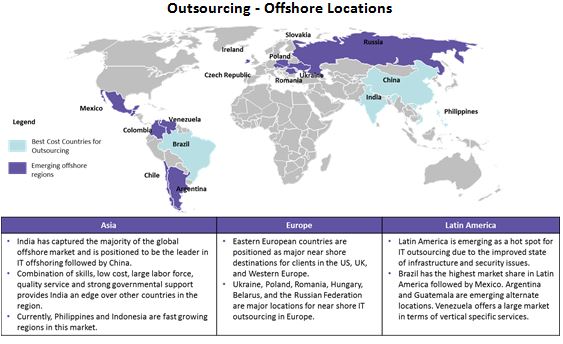 Key nearshoring destinations for outsourcing in Eastern Europe are Ukraine, Romania, and Poland.

Ukraine is one of the key IT outsourcing destinations for services such as IT maintenance, support and modernization of IT infrastructure. The companies are specialized in core areas such as programming, website development, software support and maintenance of equipment. 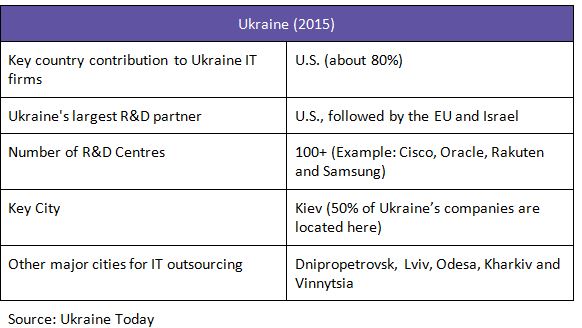 Guatemala is one of the preferred near shore destination for the U.S. firms, since the country is much closer to the U.S. in terms of culture and geography along with supportive infrastructure and skilled workforce. Attrition rate in Guatemala is high and especially in contact centers it ranges between 60%–70% (2014–15), which is higher compared to India and China.

Guatemala BPO industry offers over 90 % of the employment opportunity in voice based BPO services and the country is home to 20,000 strong bilingual workforce. Guatemala has the youngest population in Central America (More than 70% of the population is below 40 years of age). Guatemala’s culture is similar to the U.S. which helps the workforce in delivering a quality response to the U.S. clients.

Guatemala government continues to invest in improving English language proficiency by training at academic level, which will ensure supply of required workforce for BPO sector. While the demand for workforce is met, the billing rates will not be impacted. 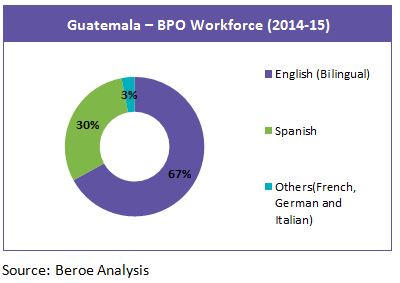 The major demand will be driven by near shoring activities by the U.S. companies, since the time zone is similar to Central Standard Time. Almost 85% of the BPO services are exported to the U.S. (almost 50%), Mexico, Central America, Canada and Spain.

Steps taken by India and Philippines to counter competition:

·  IT firms started to hunt for new IT professionals from Tier II/III cities to meet future demand, lower cost and attrition rates. In addition, IT firms are looking to expand in Tier II/III cities to leverage low real estate cost. For example, facilities in Nagpur, Nagercoil and Ahmedabad are 25% to 30% cheaper than Kolkata and Delhi. NASSCOM has estimated savings of 10-20% in the operational cost by moving their base to Tier II/III city.

·  Emerging Tier III IT destinations in India are Surat, Nagpur, and Lucknow and Bacolod and Iloilo City in the Philippines.

Indian IT industry is shifting towards global delivery model by expanding their presence to Latin America, South East Asia and Eastern European countries to utilize their low pricing strategy and display local presence. Indian software industry is shifting their strategy towards value added services such as consulting, cloud and analytics to counter the competition.

The below representation indicates the key outsourcing destinations and lists the types of services that can be outsourced to respective destinations. 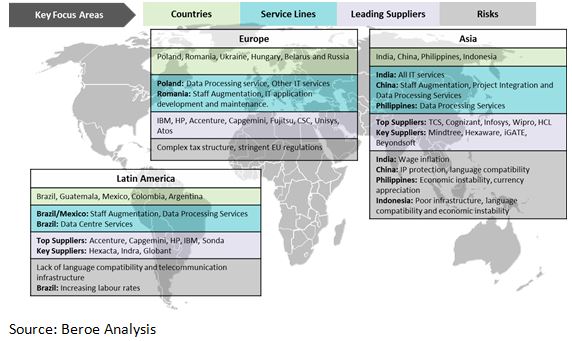 Key near shore destination for the U.S. - Brazil, Guatemala and Ukraine

Key near shore destination for the UK - Poland, Ukraine, Romania

The shift towards insourcing and near shoring is steady and consistent and it will be driven by improved client maturity, increase in automation and availability of skill sets. However, India and the Philippines will remain as key destinations for offshoring due to positive business environment, growth of Tier II and Tier III cities, high availability of language proficiency and skilled labor along with low labor cost and stable political system.

Enterprises are no longer focusing on only cost reduction and standard delivery, the key factors that can drive future business deals are in strategic areas, such as improving analytical capabilities, accessing talent, and achieving innovation. The key demand from outsourcing clients is stability in service, industry specific solutions and delivery excellence.