Company cars are generally provided to sales personnel and executives for business purposes. Currently, more than 95 percent of the company cars run on petrol/diesel.

As fuel contributes close to 33 percent of the TCO of a vehicle, fleet managers need to do a strategic analysis of alternate fuel market before adopting them to their car fleet.

Business fleet, which accounts for 40-50 percent of the passenger cars in most of the mature markets, is a major area of focus for them and they are implementing policies and tax laws to promote electric vehicles.

Considering these factors, this whitepaper will provide insights on the potential of an electric fleet and also explore if it is time to shift towards alternate fuel fleet by addressing the following points:

Passenger vehicle market is dominated by internal combustion engines. Petrol and diesel together contributes close to 95 percent of the global passenger car market. Alternate Fuel Vehicles (AFVs) cover less than 5 percent of the market.Though percentage share of diesel and petrol vehicles vary by country based on the taxation, share of AFVs is less than 5 percent in most of the markets.

European passenger car market is dominated by diesel with close to 50 percent market share. However, preferred status for Diesel is reducing across EU countries.

Car Sales by Fuel Type in the U.S.

US passenger car market is dominated by petrol vehicles with close to 95 percent market share. Since their inception in US market in 1999, close to 4.1 million hybrid vehicles were sold in the U.S. This is the second highest in the word after Japan. Sale of AFVs which include EV, Hybrid Electric Vehicle (HEV), Liquified Petroleum Gas (LPG), Natural Gas Vehicle (NGV) and E85 (ethanol-gasoline blend) is more than diesel.

True Fleet Market in the U.S. by Fuel Type

Similar to passenger car market, petrol dominates the fleet market in the U.S. More than 90 percent of the vehicles run on gasoline. There is an increasing trend of adopting AFVs in fleet market. However, diesel is still not the preferred model.

Globally, Norway leads in green score with ~40 percent AFVs. Government policies are supportive for a shift to AFV from Diesel.

·         In North America, both the U.S. and Canada provides incentives for fleets to shift to electric vehicles

·         Countries such as Germany, France, UK and Norway are taking initiatives to support diesel ban through scrappage programs

·         China and Japan are the major Asian countries promoting EVs

Pros and cons of shifting to alternate fuel vehicles

Electric vehicles provide attractive prospects for fleet managers to achieve their CO2 emission  targets. However, it may not be suitable for all drivers. Following section highlights the pros and cons of shifting to electric vehicles.

Governments across the globe are framing regulations to increase the use of alternate fuel/low emission vehicles. Key regulations governing company cars in mature fleet markets are mentioned below: 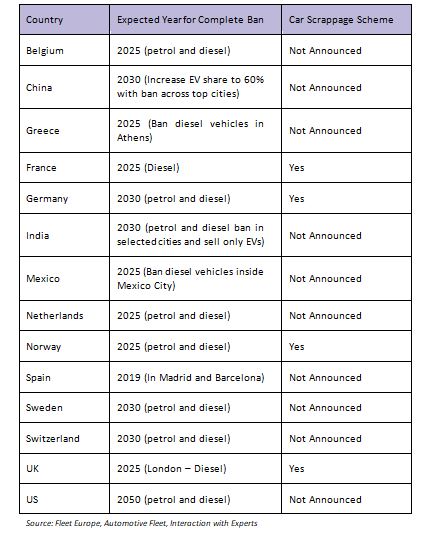 Mature markets for company cars in Western Europe and the U.S. are bringing regulations to support the adoption of EVs in fleet market.

In the next 2-3 years, top OEMs mentioned above are planning to come up with a longer list of EVs and HEVs. 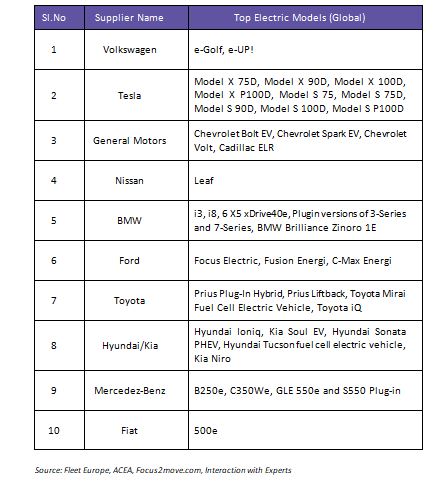 Car Sharing Models and their Impact on Electric Fleet

•        However, car sharing suppliers are supporting companies by providing hybrid and EVs

•        They are providing incentives for employees to opt for EVs

Autonomous vehicles and their impact on EV market

•        Industry analysts predict that by 2030, current fleet management approach will change to an integrated travel category managed by a mobility manager which addresses all travel needs of employees

•        Currently top car manufacturing companies as well as ride sharing platforms such as Uber and Lyft are piloting their autonomous car fleets in the U.S. and Europe

•        Once autonomous vehicles are launched in the market, most of them could be fitted with electric engines

•        A fleet of autonomous ride sharing vehicles could boost the sale of electric engines as user does not need to worry about recharging the vehicle.

In future, an employee could request an autonomous EV through his app. He can get picked up at his door step and dropped at his office. On the way to office, he could spend time preparing for a meeting or be relaxed. Once the employee gets down, the vehicle would find a parking space, where it could charge by itself.

Challenges to be addressed 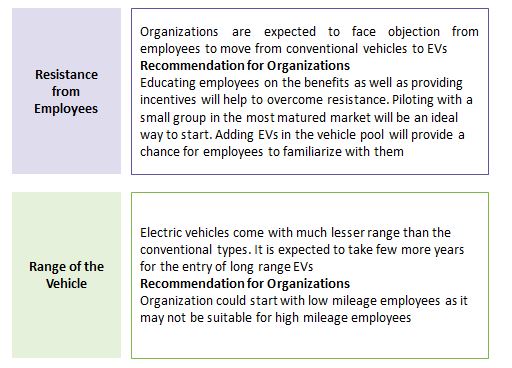 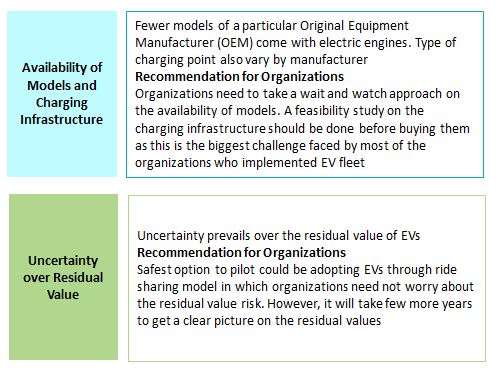 Industry experts predict that cost of manufacturing batteries will become cheaper in the coming years. According to Bloomberg New Energy Finance analysts, TCO of electric cars will be lower than petrol/diesel engine vehicles by 2022.

In France, Sanofi introduced electric shuttle buses for daily commuting. Car sharing with EVs is used for travelling between their offices and for external meetings.

Those who opt for EVs are provided mobility credit, which could be used for multiple mobility options. They are planning to expand the scheme to Frankfurt, Boston and Singapore.

Cisco is planning to reduce CO2 emission of their company cars through a combination of alternate mobility vehicles and EVs. 25 percent of Cisco’s vehicles in the Netherlands are PHEVs.

Cisco is planning to increase the number of PHEVs in the Netherlands. They are also planning to introduce EVs in other European countries.

Shifting to electric vehicles is a way of making the fleet greener and OEMs are making a lot of investments in EVs. Extended range electric vehicles having a plug-in battery, electric motor and internal combustion engine are also introduced into the market, which help organizations to use it for a longer distance.

Though EVs help organizations to reduce CO2 emission and save tax in the form of incentives and tax credits, present day EVs have their own limitations in the form of range, higher initial cost and lack of charging infrastructure. Currently, TCO of traditional petrol and diesel fuel vehicles is much lower than EFVs making them a preferred option for fleets. Hence, it is advisable to continue with diesel engines as the major fuel type for 4-5 years while adopting EVs as a temporary alternative in mature markets.