Among Asian countries, India and China are the current preferred destinations based on their domestic demand and also for exporting to other Asian countries. However, the increasing constraints for the pharma MNCs are forcing them to look beyond these regions. China in near future will not have the advantage of cheap labor and being a cost-effective destination because of its continuous increase in labor wages (12-15 percent from 2011). India too is hit by drug pricing policy of the government and the inclusion of drugs in the National List of Essential Medicines (NLEM). In 2011, while NLEM had 348 drugs, in 2013, it moved up to 406 drugs.

Among the emerging Asian pharma markets, Vietnam is expected to show solid growth in the next 5-10 years. MNCs in Vietnam have been importing most of the drugs and for long considered the country to be a marketing hub. The government has therefore initiated efforts to reduce dependence on imports and started promoting local manufacturing. Few MNCs started capitalizing on this by forming joint ventures, acquiring local facilities or constructing new facilities. There is a huge potential for the MNCs to manufacture in vietnam and cater to the rising domestic demand as well as export to other Asian countries.

This whitepaper provides a clear view on the government policies and its impact on the transformation of Vietnam into a favourable destination for pharmaceutical companies.

As the government is emphasizing on local manufacturing, it is ideal for MNCs to shift their strategy from importing (for meeting domestic demand) to forming joint ventures, acquiring local facilities or constructing new facilities. Investment plans on a long term basis would turn out to be a palpable return for MNCs and generic drug makers for the next 10 years and years to come.

Growth opportunities have improved following the change in government policy to promote local manufacturing to reduce the dependence on imports. However, lack of infrastructure, technology barriers, high dependence on import of APIs are the main reasons for the Vietnam market to be dominated by imported drugs. Thus, Vietnam presents MNCs with ample opportunities to capitalize on the rising demand for local manufacturing and serve as a potential hub for exporting to other Asian countries such as Cambodia, Singapore and Korea.

The Vietnam pharmaceutical market is about $3.5 billion in 2015 and is expected to double by 2020 with a CAGR of 14 percent. While the high growth rate is attracting global pharmaceutical companies, there are not many exclusive contract manufacturers; almost all of the pharma companies provide contract manufacturing services based on demand. Since the government is promoting local production to meet 80 percent of the domestic demand,  pharma companies that are currently importing and selling drugs are expected to partner with the local manufacturers. The CMO market is therefore expected to flourish in the coming years. 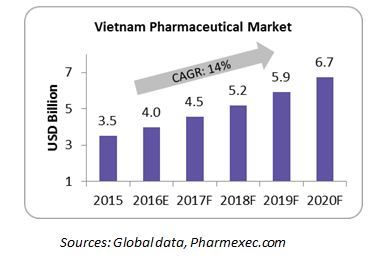 What is driving the pharmaceutical market in Vietnam? 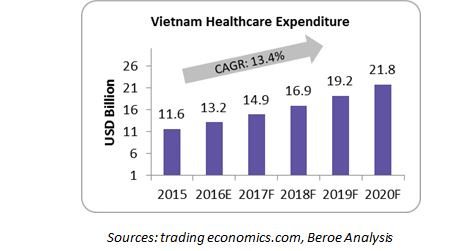 Government is supporting the local production of generics to reduce imports and has planned to meet 80 percent of domestic demand by 2020 through local production. Government is also promoting investment from both domestic and foreign pharma companies and proposed plans to invest $241 million in eight projects within the domestic manufacturing industry

There is no law that mandates compulsory owning of a manufacturing facility in Vietnam for foreign MNCs to market their drugs locally. However, the MNCs must establish legal presence via representative offices and partner with local drug distributors for sale of its drugs. Government has speedened the new drug approval, which takes just six months which is much faster when compared to other Asian countries  such as China (18 and 26 months) and India (12 months).

Foreign MNCs are allowed to establish 100 percent fully owned subsidiaries in Vietnam for manufacturing pharmaceutical products. They can also distribute drugs produced in its Vietnam manufacturing facility without distributors.

Vietnam signed the Trans-Pacific Partnership (TPP), a trade agreement between 12 countries, on February 4, 2016. It is expected that, once implemented, patents of foreign pharmaceutical companies’ drugs will be extended from 5 to 10 years.

Moreover, government is keen on extending the national health insurance coverage to 90 percent of the total population by 2020, from 76 percent in 2015.

MNCs in Vietnam and their operational strategies

Below table depicts how big pharma companies/MNCs have established their presence through facility expansions and partnerships.

Sanofi leads the Vietnam pharmaceutical market with over 4 percent of the market share, and is the only global pharmaceutical company to have significant operating and manufacturing activities. It has more than two world class manufacturing facilities for generics and some prescription drugs.

Companies such as GSK have joint ventures wherein the local manufacturer produces for the company  to sell those products in Vietnam.

Distribution of imported drugs of global pharmaceutical companies is the most common method of operation in Vietnam. Over 70 percent of the foreign pharmaceutical companies in vietnam have distribution operations. However, this trend is expected to change as government is restricting imports and favouring the purchase of domestic drugs over imported drugs by hospitals and pharmacies to support local production.

In 2015, domestic production contributed to only 50 percent of Vietnam’s pharma demand; the rest of the drugs were imported, which means there is huge potential for growth.

Lack of infrastructure, technology barriers and high dependence on import of APIs are the main reasons for the Vietnam market to be dominated by imported drugs (50 percent). Technological barrier is the major drawback affecting API production in Vietnam. However, import from low cost countries such as India, China and Malaysia is commonly practiced due to their proximity to Vietnam and availability of low cost APIs. 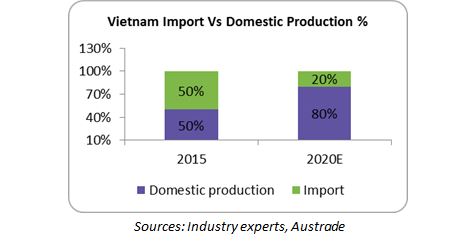 Technological capability is limited for the domestic CMOs for manufacturing complex sterile drugs which can be made possible by establishing joint ventures and via technology transfer to manufacture locally. This will reduce the import cost for the MNCs and help in export of these drugs to other Asia markets, especially to Cambodia, Singapore, Korea, Malaysia, Laos, Indonesia, Thailand and the Philippines which are the major countries importing from Vietnam.

Availability of low cost high skilled labor is one of the major reasons driving the foreign pharmaceutical companies to look at establishing manufacturing facilities in Vietnam. Skilled labor cost is at least 20-30 percent lesser than that in China and India.

Minimum wage for employees of MNCs operating in Vietnam is around $130 per month, which is one of the lowest in the world and much cheaper when compared to China ($240/month) and India ($190/month). There is also an increase in the availability of qualified graduates in Vietnam. Moreover, increase in average wages is lesser than 3-4 percent per year, which is very less compared to India and China.

Cost of constructing and operating a manufacturing facility is about 30-40 percent less than in India and China. Manufacturing facilities in Vietnam also comply with the WHO GMP standards. The country is therefore an attractive destination for the foreign pharma companies to capitalize on the domestic demand and also serve as a hub for export to other countries in Asia.

Flourishing economic growth, rise in population and national health insurance coverage proposed by the government, promotion of local manufacturing and enormous opportunity for exports are major reasons for the rapid growth of Vietnam pharmaceutical market.  It is also supporting the outsourcing trend of the foreign pharma companies to manufacture locally. Thus, the vietnam market is poised for growth and provides good opportunity for MNCs to capitalize on domestic as well as export market.