Dehydrated onionswould be a potential alternative to fresh onions given its prolonged shelf life, easy storageattributes and lower volume requirements which could help reduce overall spend.Cost savingsup to35-40% can be achievedbyswitchingto dehydrated onions

Dehydrated onions  would be a potential alternative to fresh onions given its prolonged shelf life, easy storage  attributes and lower volume requirements which could help reduce overall spend.  Cost savings  up to  35-40% can be achieved  by  switching  to dehydrated onions

Lack of dehydrated onions in the domestic market would make KHC  dependent on imports from India, Egypt  and USA markets for dehydrated onions, with India and Egypt offering better price attractiveness.

Which would be an Ideal sourcing region for dehydrated onions to Brazil? 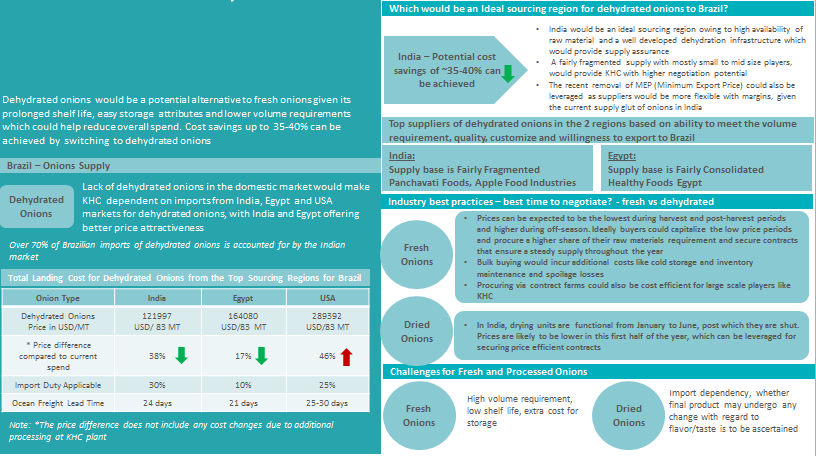 Dehydrated onions are expected to continue to dominate market share for processed onions, whereas , frozen and powdered onions are anticipated to witness fastest growth

Small farmers account for more than 50 percent of the total country's production. Brazil produces approximately 1.49 MMT of onions annually with an average yield of about 24 tons/hectare

Overall supply is lower with a higher availability of smaller sized onions as a result of last September's drought. The harvest season is  currently nearing an end and some of the harvest is still underway

Majority of the onions are imported from the Netherlands. Though onion season is nearing an end in domestic market, the current demand for Dutch onions remain weak are expected to pick up in the coming months.